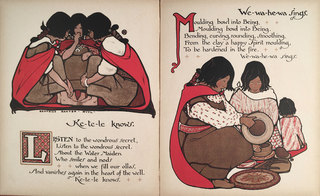 I love illustrated books, which in today’s world largely means children’s books. This combination of text and illustration from 1909 is by Beatrice Baxter Ruyl (who posed for photographer Gertrude Käsebier’s picture The Sketch). The children’s book pulp-fiction syndicate for whom my character, Mattie Palmer, works would not publish work of the caliber of Little Indian Maids at Work and Play; but I’d like to think Mattie would admire it.

Beatrice Baxter, was born in Denver, Colorado, in 1879, studied art in Boston and at the Académie Colarossi in Paris, and married artist/illustrator Louis Ruyl. In the first decade of the 20th C, she wrote or illustrated Little Indian Maids at Work and Play and other books. She also drew illustrations for the Boston Herald. The Ruyls were part of the Ogunquit, Maine, art scene; but Beatrice’s best-known work today stems from a visit she made to the Zuni Pueblo. Like writer Willa Cather, she must have been influenced by Western origins her all her life.