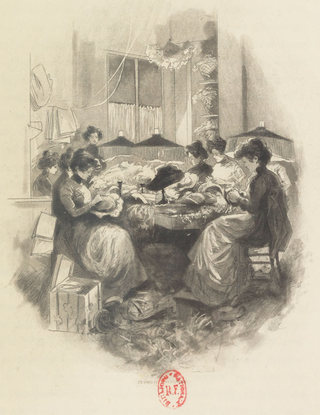 I am reading the catalogue for Degas, Impressionism, and the Paris Millinery Trade, a 2017 exhibition at the Legion of Honor museum in San Francisco. The show has now closed, but the museum mounted a great website where you can still explore some of its themes and images—including this illustration by Courboin.

Although the ladies in Where the Light Falls do wear hats, and fashion and clothes figure as a leitmotiv in the novel, the millinery trade per se does not. If this catalogue had been available when I was doing my research, a hat shop might have at least received a mention! When Jeanette and Effie accompany Adeline Vann to Worth’s on the rue de la Paix, for instance, mightn’t they at least glance at Hoefele sisters’ hats on display on the mezzanine of the same building?! In any case, it’s always fun to have the world of my novel deepen in my own mind. And, writers of historical fiction, be sure to look into art exhibition catalogues whenever you are researching a period and place. They are goldmines.

As for the Courboin picture, it is a reminder that much that characterized society ca. 1880 still obtained ca. 1908 (the setting for ANONYMITY)—including the fact that some handwork was still done largely by poorly paid women. It is also a reminder that writers can use images differently from social or art historians. Instead of prompting groans about how men’s imaginations prettified women’s sweatshops, I’m letting this one inspire me to write realistic scenes in which women at the low-pay end of the publishing world support each other.