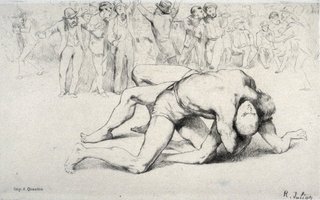 Rodolphe Julian, Wrestlers (n.d.)
Mention of Rodolphe Julian (1839–1907) in last week’s post on the clothed model made me realize that I should post on Julian himself—and, lo, another kneeling figure.

Born (and buried) in the village of Lapalud, Haut Vaucluse, in Provence, he was sent at an early age to Marseille to work in a bookstore. In the store he read Balzac; in the city he learned the Greco-Roman style of wrestling popular then in Provence. He also discovered his talent for drawing and took himself to Paris to pursue a career.

Although apparently he was never officially enrolled in the Ecole des Beaux Arts, he studied with Alexandre Cabanel and Léon Cogniet, who both taught there. The story handed down is that while he was a student, he supported himself by wrestling in a circus—a circus that ran continually in the red until he helped the owner make it profitable. As an artist, he showed in the famous (or infamous) Salon des refusés of 1863 and subsequently in official Salons. By 1868, however, he had realized that he would not have a great career as an artist. Instead, he turned his entrepreneurial talents to founding an art school where students could pay their fees and receive instruction at a high level without having to pass entrance competitions. This, of course, was the Académie Julian.

One other biographical matter is touched on in Where the Light Falls. Amélie Beaury-Sorel (1848–1924) was a student at the school ca. 1880 and is mentioned in my novel as one of Julian’s favorites. In fact, in 1895 he married her.

For my account of Rodolphe Julian in WTLF, I relied largely on two books, The Lure of Paris: Nineteenth-Century American Painters and Their French Teachers by H. Barbara Weinberg and Overcoming All Obstacles: The Women of the Académie Julian by Gabriel P. Weisberg.

For this blog post, I have also used a most informative web article (in French), Le Peintre Rodolphe Julian.

For a French blog post that includes images of illustrations by Julian from Léon Claudel’s Ompdrailles le Tombeau-des-Lutteurs, click here.