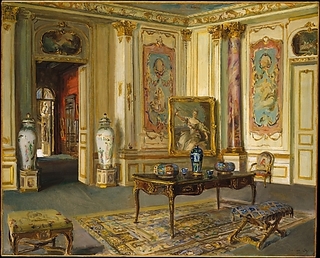 Walter Gay, Le Grand Salon, Musée Jacquemart-André (1914)
The delicious Museé Jacquemart-André helped me invent the interior of the Renicks' house even if my fictional house is supposed to be older. Artist Nélie Jacquemart and her banker husband, Edouard André, built the mansion to display their art collection, which included many 18th C paintings, tapestries, and objects. To walk through it was to be in the house of connoisseurs with tastes similar to Marius Renick's. Gay's Grand Salon suggests why, after entering the Renicks' house, Edward finds that from now on he must expand his imagination for aristocratic scenes when he reads Balzac.

The paintings of Walter Gay (1856–1937), which were commissioned by the very rich, tickle me. Along with other artists' pictures of quite different empty rooms, they also reassure me that Jeanette's emerging interest in depicting empty rooms fits the period. For a blog post with several more of Gay's works, click here.
Be the first to comment