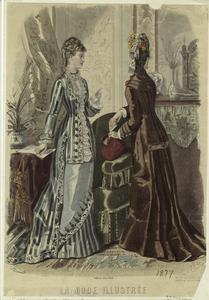 Fashion plate in La Mode Illustrée (1877)
If Jeanette had seen this fashion plate of only a year earlier, she might not have been so mortified by the stripes in the outfit she had to wear to the Renicks' dinner party. Then again, according to Louise Hall Tharp, in 1877 Augusta Saint-Gaudens (the almost identically named wife of sculptor Augustus Saint-Gaudens) had a Parisian dressmaker do over her Boston wardrobe, including pleating a striped skirt so that only the gray was visible.

Later in the novel, Jeanette, Amy, and Emily use plates from Cornelia’s discarded fashion magazines to get ideas for their own artwork. They were not alone: A current major exhibition at the Metropolitan Museum of Art in New York is devoted to Impressionism, Fashion, and Modernity.