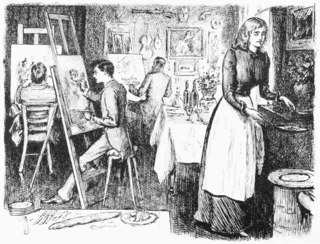 George du Maurier, “Cuisine Bourgeoisise en Bohème,” (1894)
As I said in an earlier post, my editor teased me about how often my characters eat. In a scene that got dropped from “Winter’s Cold,” Jeanette demonstrates breaking two eggs at once (a trick my college roommate, the writer Elaine Fowler Palencia, taught me) and Amy makes omelettes on the studio stove. In “Cuisine Bourgeoisise en Bohème,” from the novel Trilby , the artist and writer George du Maurier shows the model Trilby O'Farrell cooking for the artists who employ her. It illustrates the following sentence: “Sometimes on a rainy day, when it was decided they should dine at home, she would fetch the food and cook it, and lay the cloth, and even make the salad.” You can see the laid table with a vase of flowers in the background. Amy keeps up such domestic standards, and this picture gave me some hints for her and Sonja’s studio as well as the studio omelettes.

Trilby is one of the great sources for life among 19th C male art students in Paris. I could transpose some of its central characters’ activities to my women essentially unchanged, e.g., artistic chums gathering to work from the same motif. The relation of female artists to women models, however, had to be rethought. Although later in my novel, La Greque both models and keeps house for Amy and Sonja, her plight and her presence are a dark undertone whereas du Maurier took female servitude blithely for granted.