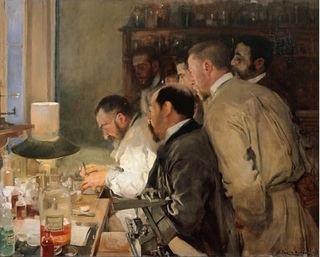 Joaquín Sorolla y Bastida, Research (1897)
The Spanish painter Sorolla captures the intensity of a 19th C scientific researcher and his colleagues in a laboratory. Outside science fiction, the topic of scientific research is not much explored in art or literature (some of my own chapter was edited out). In painting, I can think of only a few medical examples, e.g., Rembrandt’s Anatomy Lesson of Dr. Noclaes Tulp and two clinical paintings by Thomas Eakins.

In real life, as in Sorolla’s painting, sharing results is important to researchers. In Germany, Edward can show some of his discoveries to Cousin Paul’s chemists; and in Paris, he deliberately rents space where he will be surrounded by other investigators and practical men. Ultimately, moreover, the prospect of the large Murer Bros. laboratory helps draw him back to Cincinnati.

If anyone can suggest artwork or literature that takes scientific research seriously, please leave a comment!

this isn't an exact match but Antony Trollope's novel, The Claverings, has an engineer! Not seen as at all eligible , though he marries the girl. An intruder.