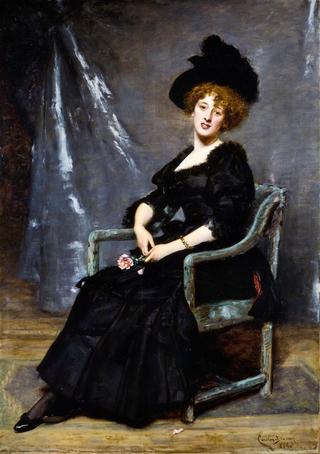 Carolus-Duran, Portrait of Lucy Lee Robbins (1884)
The character Lucille Dobbs is based only very loosely on this portrait of Lucy Lee Robbins, an American who studied with Carolus-Duran in the 1880’s. Although Robbins was considered for the prize of painting a mural in the Women’s Building at the Chicago World’s Fair of 1893, she was said by Mrs. Palmer Potter to be “not above reproach” in her relations with the master; and the commission went instead to Mary Cassatt. If I had wanted to include the historical woman in my novel, I would have felt obliged to be fair to her. Since a bitchy sensualist suited my purpose better as a contrast to Amy Richardson, I adopted Mrs. Potter’s sniffiness, borrowed Robbins’ red hair and moist lower lip, twisted her name—but left her talent intact.

For a photograph of Robbins in her studio, click here.

For an extensive recent article on Robbins, click here