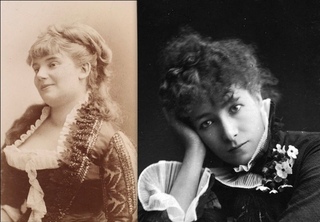 Nadar, Sophie Croizette (n.d.) and Nadar, Sarah Bernhardt (n.d.)
One of the better readers of my manuscript objected to having the two actresses appear at the garden party (too hokey), but I thought a little razzle-dazzle was called for. Besides, don’t we all get a kick out of a celebrity cameo appearance?

When I began my research, Sophie Croizette was discovery for me. She was Pauline Carolus-Duran’s sister and Bernhardt’s biggest rival until she left the stage to marry a banker. She was an engaging personality, sensual and big-hearted. Her motto, Quand même, might be translated as “All the same” or “Nevertheless.” Imagine it spoken with a sly, tolerant twinkle in her eye.

As for the Divine Sarah Bernhardt, someone asked me whether she dressed as exotically as I said she did, and the simple answer is, yes. Much has been written about her for good reason. Her motto was À outrance or “To the hilt,” “Over the top.” For a portrait that catches some of her skinny exoticism, click here. And for another side of her personality, ca. 1877, click here.
Be the first to comment