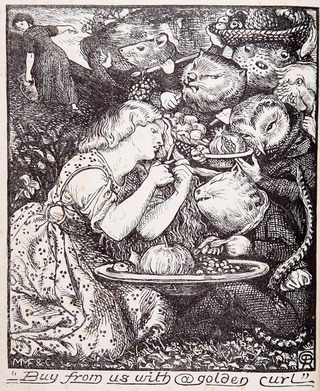 Dante Gabriel Rossetti, illustration for Christin Rossetti, Goblin Market (1862)
Writing historical fiction calls for focus, research, and deliberate decisions, but it also inevitably draws on whatever lurks in the writer’s mind. The English pre-Raphaelites have long been a part of my life because my husband, John, studied them in graduate school. When it came time dramatize a winter’s afternoon in Amy and Sonja’s studio, for some reason Christina Rossetti’s line about “It snows and blows and you’re too curious, fie” floated up into my consciousness. Perfect for the weather and for Emily.

When I began the project, I intended Emily to exemplify the sort of weak art student who fell by the wayside in tough competition. Instead, she turned strange and became far more interesting to me as the book went along. I came to imagine her in future painting melancholy, obsessive, dense fairy pictures, something like those of Richard Dadd. She is also capable of gaiety, however, as her trading lines of Christina Rossetti’s Goblin Market with Jeanette is meant to indicate. It becomes a sad note when she quotes the poem again later in the book.

For a thorough exploration of Christina Rossetti and the poem on the Victorian Web click here.

For a bookseller’s guest post on a blog devoted to writing Steampunk fiction, click here. If you are new to the steampunk genre, you may get a kick out of exploring the site.
Be the first to comment