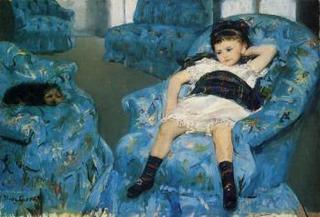 I had Jeanette and Edward react to Mary Cassatt’s Portrait of a Little Girl at the 4th Impressionist Exhibition for several reasons. First and obviously, it fell in with a focus on women painters. Second, the tilting of the picture plane, influenced by Japanese woodcuts, was an important upending of pictorial convention at the time, and I wanted to show how the older Edward could in some ways be more open to the avant-garde than a typical art student like Jeanette who was invested in the prevailing conventions at the very time they were about to fall. Third, it offered an opportunity to mention synthetic colorants, a minor motif in the book. Finally, its unsentimental view of childhood fitted nicely into a story inhabited by Jeanette’s little cousin, Laura Vann, and the child model, Angelica Antonielli (whom Amy calls Demonica).

For Anders Zorn's 1884 sentimental knockoff of the pose, click here.