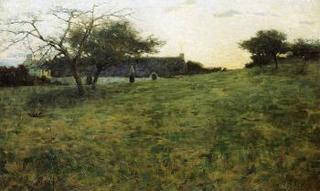 Arthur Wesley Dow, Evening (1889)
Jeanette experiences her art intensely when she is in the Jernagans’ orchard, looking down on their farm. Dow’s Evening was one of the Breton landscapes I had in mind when I imagined what she saw as she composed her major picture for the second summer in Pont Aven. Obviously, Dow’s perspective is not downhill, but his colors and tonality are very much in the range where Jeanette’s work is heading—except that I have given her the touches of red and gold that run through the novel both as true to the art of the period and as hints at strong feeling.

At the same time that Dow was in Brittany, Paul Gauguin was leading the way into painting Pont Aven in nothing but vivid hues. For examples, click here, here, and here. These are colors that Jeanette might use for the Mediterranean, but not northern landscapes. Back in America, I foresee her being influenced by Tonalism and eventually the American Impressionists that Edward would love.