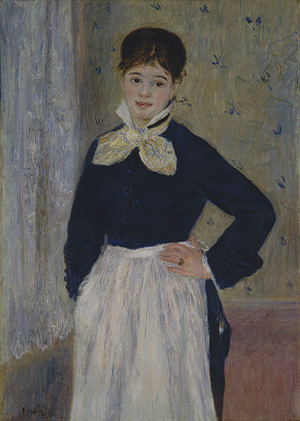 Auguste Renoir, A Waitress at Duval's Restaurant (ca. 1875)
To make a world real, it seems to me you have to know what people ate and where and when. When the Duval restaurants turned up early in my research I knew I could use them; and Renoir's painting of a Duval waitress became a touchstone image for me. Not only the quietly respectable young woman but the figured wallpaper and curtains suggested a feminine air that would be reassuring to Jeanette and Effie.

Pierre Louis Duval, a butcher, began selling servings of a meat cooked in broth to workers ca. 1855. From this venture grew a chain of restaurants. They were clean, well-run places where women on a budget could eat safely.

As a way to show more than one typical living arrangement forAmerican women art students, I had Jeanette and Effie move from their boarding house on the Rue Jacob to an apartment with a studio on the Rue du Fleurus, where they were on their own for meals. One solution is to go a Duval restaurant.

In The Steward’s Handbook and Guide to Party Catering, Jessup Whitehead wrote of them, “The truth seems to be that they disappoint some visitors with their small portions served, their bare marble tables without tablecloths; their female waiters; a certain sort of want of style; and that is really what they are for and why they succeed - they are popular restaurants.” Read more at The Bouillons-Duvals Sytem.

For the Duval restaurant on the grounds of the 1878 World’s Fair, click here.

Finally, I can't think of any significance, but isn't it interesting that the waitress is posed hand to hip just like Sargent's draped boy in yesterday's blog tip?
Be the first to comment