Drums at the Tuileries Garden 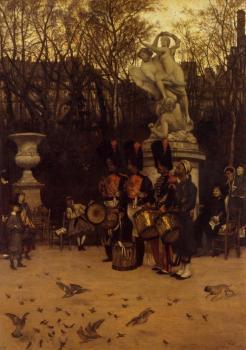 James Tissot, Beating the Retreat in the Tuileries Gardens (1867)
"The naked upper branches reached toward a primordial wildness having little to do with parks or men.… The trees at Shiloh had been like that.… In the growing dusk, golden lights pricked out the Rue de Rivoli to his left.… At the rat-a-tat-tat of a drum being beaten to signal the closing hour, he felt a momentary urge to flout the martial-sounding order."

I was looking for a different painting by James Tissot last week when I came across this picture for the first time. It startled me by its aptness for the scene in which Edward is in the Tuileries Garden after hearing a concert. There were the writhing tree limbs; there were the lights coming on outside the park; there were the drummers. I based my passage entirely on written sources, including an 1878 letter of Kenyon Cox; but I love adding this visual enhancement after the fact.