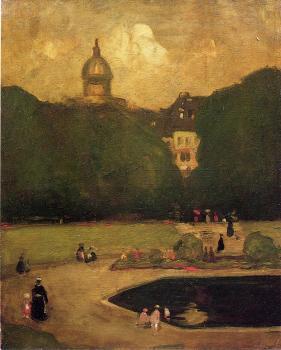 Robert Henri, Au Jardin du Luxembourg (1899)
After Jeanette completes Edward's portrait, they walk to the Luxembourg Garden. This painting of it by Robert Henri is reproduced in Barbara Weinberg’s book, The Lure of Paris:Nineteenth-Century American Painters and Their French Teachers (1991), my real introduction to the whole topic of an American woman studying art in Paris. Consequently, although the picture was painted twenty years after the action of my novel and in a later style, its vividness has been with me all along.

The presence of the Pantheon beyond the Luxembourg Garden also figured in my imagination: it is visible from Jeanette and Effie’s window at the end of Jeanette’s perfect day with Edward (a day to be shattered just as he leaves), and Amy declares she will climb out onto the roof of the Pantheon to shout the good news if her painting is accepted by a Salon jury.

Amy’s claim, by the way, is an echo of a friend’s plan to shout out her triumph from the top of the University of Texas tower when she successfully defended her PhD. thesis. A novelist never knows what will float up to be transmuted.

For a novel in which the artist-narrator's teacher was Robert Henri, read The Underpainter by Jane Urquhart. I found it strange, cool, and compelling.