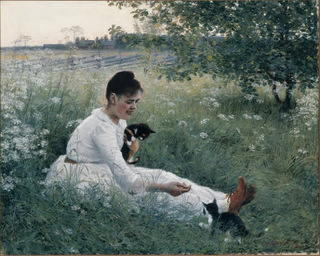 Elin Kleopatra Danielson-Gambogi, Woman with Cats (n.d.)
While I was working on the previous post, about Anna Ancher of the Skagen colony, I ran across an archived blog post on the Finnish painter, Elin Kleopatra Danielson-Gambogi (1861–1919). She was an almost exact contemporary of Jeanette and, after training in Finland, went to Paris and Pont Aven, where she became a follower of Jules Bastien-Lepage. I have selected her Woman with Cats from the many paintings in the It’s About Time post because it so clearly derives from (and sentimentalizes!) Bastien-Lepage’s Harvesters, a painting that influenced a generation.

In Paris, Danielson-Gambogi was part of a community of Nordic painters, and it’s worth noting that Carolus-Duran taught several women from the Scandinavian countries, including six Swedes: Emma Toll (1847–1917), Hulda Schenson (1847–1940), Mina (Wilhelmina) Carlson-Bredberg (1857-1943), Elin Molin (1855–1948), Hulda Ryberg (1836–1924), and Hildegard Zoir (1876–1935). Swelling an already large dramatis personae with anyone from Carolus’s atelier besides Lucile Dobbs would have cluttered my novel; but please feel free to imagine a Dane, a Swede, a Norwegian, or a Finn for Jeanette to befriend in the class.