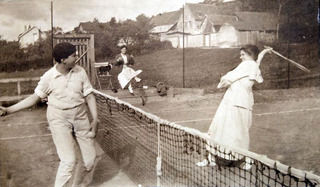 Mary MacMonnies plays tennis at the Hotel Baudy, Giverny
Doesn’t the animation in the faces of both tennis players and the spectator bring the past to life? It says to me, Invent a story!

The photo is one of many at a French-language website on the Hotel Baudy. In the story of every summer art colony, the owner of at least one modest hotel, tavern, restaurant, or inn recognized a new market in the visiting artists. In Giverny, it was Gaston and Angélina Baudy. The artists who were seeking authenticity among rural inhabitants or fishermen brought with them wholly different habits and tastes, e.g., playing tennis. For more pictures and French text about accommodations for the sport at the Hotel Baudy, click here.

Whether or not I pursue a fictional Giverny of the 1880’s, a couple of books on my shelf allow me to retreat into the American colony there from time to time. The first is a beautifully and informatively illustrated coffee-table book by Claire Joyes, The Taste of Giverny: At Home with Monet an the American Impressionists (2000)—with recipes from a manuscript book belonging to American Theodore Earl Butler, the son-in-law of Claude Monet, and others from the kitchen of the Hotel Baudy.
The other gorgeous book is more scholarly, a catalogue to the 2007 show, Impressionist Giverny: A Colony of Artists, 1885–1915.

For more information in English if you wish to visit the present-day hotel, click here.