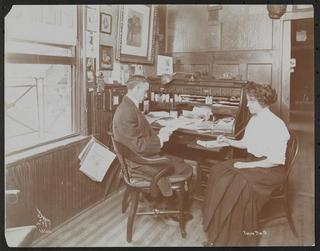 Empire Film Company (1910)
As I tried to say last Thursday, I'll be writing more about my new work as well as Where the Light Falls. For instance, the stenographer shown here taking shorthand on her pad is younger than my new heroine, but I found the picture helpful in visualizing how Mattie might be dressed (shirt sleeves, no hat, pleated skirt) and the office where she works (paneled walls, gooseneck lamp, boss’s desk with pigeonholes, armless wooden chair for her).

And in writing this post, I’ve just noticed something puzzling. Look at the jacket the boss is wearing. Doesn’t it look too full to be a suit coat? Does anybody know what it is? Mattie’s boss has his tailor cut his clothes with extra room so that he can act out action scenes in the office, but this seems something else!

The picture is one of several photographs taken inside the Empire Film Co., a motion picture business. It can be found in the huge digitized collections of the Museum of the city of New York, on which I am relying as I imagine life in New York City in 1908.

What helps you the most in re-imagining the past?
Be the first to comment