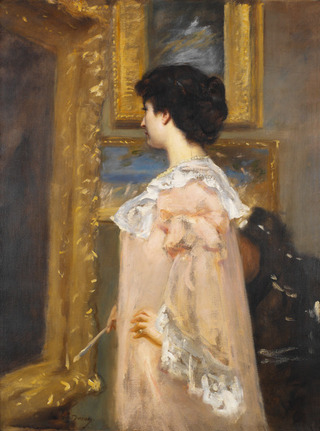 Carolus-Duran, Portrait of an Artist in Her Studio (ca. 1880)
Pauline Marie Charlotte Croizette was an artist and the sister of actress Sophie Croizette. In 1868, Pauline met Carolus-Duran in the Louvre, where she was copying old masters, and married him that year. I love his portrait of her in her studio, painted some twelve years later. I proposed it as cover art for Where the Light Falls. (What I really want is a painter’s smock like hers!)

Pauline worked in pastels and exhibited at the Société des Artists Français beginning in 1864 and received a bronze medal in 1875. For an example of her work, click here.

Carolus-Duran painted the two of them as newlyweds in Le Baiser. His 1869 portrait of Pauline as a Lady with a Glove helped make him famous.

Sarah Bernhardt, who knew the Croizette sisters as girls, wrote: “Sophie was very gay, and what we liked best was to go to the Museum where her sister Pauline, who was later on to become Mme. Carolus Duran, was copying pictures by the great masters. Pauline was as cold and calm as Sophie was charming, talkative, and noisy. Pauline Croizette was beautiful, but I liked Sophie better; she was more gracious and pretty.” Memories of My Life: Being My Personal, Professional, and Social Recollections as Woman and Artist (1907), p. 40.

It would have been fun to include Pauline in the novel, but I couldn’t find out enough about her to make her a character. She does look beautiful and calm, doesn’t she?