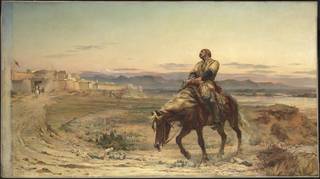 Elizabeth Butler, The Remnants of an Army (1879)
An important new show, Artist & Empire: Facing Britain’s Imperial Past, will be opening at the Tate Gallery in London on November 25, 2015. It features this painting by Elizabeth Butler among many pictures that have not been on display for a long time.

For historical novelists, art exhibitions and catalogues provide an opportunity to work toward the double mind required to understand past events as their players did while communicating what happened and how it can be interpreted to a present audience. One question: how much more widely should the writer be informed than either the narrator of a story or the characters in it? The Remnants of an Army, for instance, was painted in the very year that John Singer Sargent’s portrait of Carolus-Duran won an honorable mention at the Paris Salon, but I have to admit I was ignorant of the event Lady Butler commemorated in it. Jeanette certainly would not have known or cared much about Britain’s colonial wars or France’s colonies, but what about Edward? what about Effie? what about Carolus-Duran? My only conclusion this morning is that we must all keep expanding our horizons and the depths of our understanding—and then watch how our characters react.

For more about Butler and her painting, Scotland for Ever, click here.

For a thoughtful piece about current British perceptions of its colonial past and the Tate show in particular, click here .