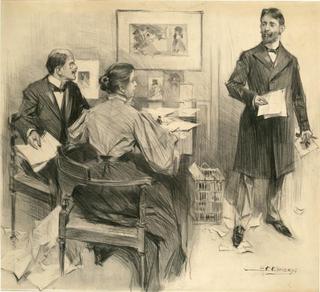 H. C. Christy, In the City Editor’s Room (1897)
Mattie Palmer, the heroine of ANONYMITY, my work-in-progress, is a “stenographer” or secretary in a publishing firm. Before going to New York around 1900, she had been a reporter in Cincinnati.

So far, I haven’t been able to find the short story, “A Girl Who Became a Reporter,” for which this is an illustration; but here is the summary given at the Delaware Art Museum website: “This is a variant of a drawing that appeared in a story about a young woman stenographer at a New York City newspaper. Her boss refuses to let her work as a street reporter, suggesting that she cover fashion instead. After she undertakes an investigation in her off hours, her success wins her a reporter's position.”

Fits right in with Mattie’s experience.