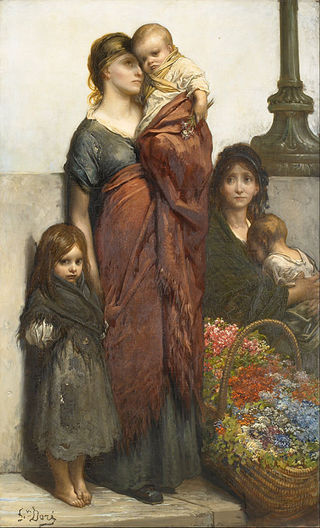 The characters in Where the Light Falls buy flowers variously from street peddlers, at stalls in big outdoor markets, and in an upscale florist’s shop. I have posted some of the beautiful depictions of the motif in the blog. Doré’s painting brought me up short, however, with its reminder of the utter poverty that drove many women and children to try to eke out a living by selling bunches of flowers on the street. The comparable social issue touched on in my novel was the desperation that drove some women to model for artists. Doré’s women strike a chord; they could be outcasts on the fringes of the Parisian markets where models were hired weekly. In our present economic circumstances, when corporations exploit unpaid interns, military veterans can’t find jobs, and the “gig economy” is too often lauded as if it actually helped workers, we need prompts to see the individuals who struggle every day.

Via It’a About Time.