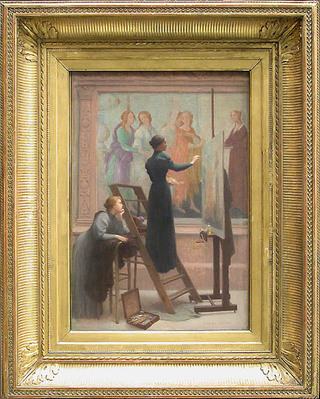 Correction: Thanks to a reader, Daisy, I am happy (but embarrassed) to correct a blooper: Azambre was male, not female. Luckily I didn't say anything stupid about "the female gaze" in this post; and the suggestion that the religious wing of commercial art might be useful to fiction stands. Thanks again, Daisy!

At a lecture in advance of the Clark Art Institute’s upcoming show, Women Artists in Paris, 1850–1900 (June 9–Spetember 3, 2018) I learned about this painting by Étienne Azambre (1859–1933). Azambre was an almost exact contemporary of the real Jeanette and studied at the Académie Julian from 1879 to 1882 in the studio of Adolphe William Bouguereau and Tony Robert-Fleury, where I place my fictional Jeanette. Wish I had known about her in time!

Azambre painted portraits and genre pictures and showed regularly at the annual Salon; but her primary focus became religious paintings, including the decoration of the Ééglise Sainte-Marie Madeleine d'Équennes-Éramecourt. Of most interest to me, she designed pious images to be mass produced and sold in various forms by vendors at churches and shrines. Now there’s a corner of commercial art that had never occurred to me! It might be useful in a story about young artists who try to make a living by their skills even when they don’t succeed in the top echelons of the fine arts.

For Azambre’s biography (in French) and religious imagery, click here.

NB: I like it that the Louvre has mounted this digitized image showing the effect of the frame—a good reminder that that's how they are usually seen.

Wasn't she a he? https://en.wikipedia.org/wiki/%C3%89tienne_Azambre

Whoops! You're right. Thanks.