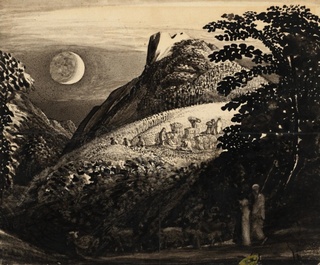 Samuel Palmer, study for “A Pastoral Scene” (1835)
Grain is harvested at the end of summer, not in November, but the American Thanksgiving originates in gratitude for the harvest. Rather than rush into the frenzy of a commercialized Christmas season, I am lingering with rural imagery by Samuel Palmer, whom I have just discovered. (Okay, I should have known about him sooner, but I didn’t.) Who wouldn’t rather contemplate that mysterious moon, the harvesters in the light of the sun coming from behind us, the stipple-black tree on the right, and the dusky sheep and shepherds rather than face unholy shepherds, wise men, and plastic holly?

This afternoon, I took a walk and saw the countryside around me through eyes newly alerted to patterns of light and shadow. The monochrome Harvest Moon and six sepia studies by Palmer in Oxford, fit oddly well with late autumn in the Berkshire hills this year. Leaves on the Norway maples, which usually turn a brilliant yellow and carpet the ground, have turned khaki instead and still cling to trees with bark almost the same color. They are dry and wrinkled so that they present surfaces to reflect sunlight in dabs or curl under darkly. My next writer’s exercise will be to try to set down verbal descriptions informed by the Palmer’s pen-stroke imagery.

To learn about him, I’m reading Samuel Palmer: Shadows on the Wall by William Vaughn. For more about the artist and a book I hope to track down, click here.

For Harvest Moon and other works by Palmer at the Tate in London, click here.

And for a bonanza of drawings, oil paintings, and watercolors by Palmer at the zoomable Google Project, click here.
Be the first to comment