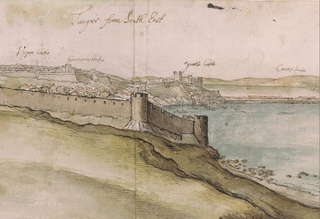 Detail, Wenceslaus Hollar, A View of Tangier from the Southeast (ca. 1669)
At special exhibitions, I sometimes play the game of deciding which picture or object I would take home with me if I could. I’ve just been to the Clark Art Institute to see Drawn to Greatness: Master Drawings from the Thaw Collection, which originated at the Morgan Library and Museum in New York and runs in Williamstown only through April 22, 2018. If you can squeeze in a trip, go! (Andrea Scott called the show “almost unbearably excellent” in a New Yorker review.)

A Berthe Morisot, a Cezanne, and Hollar’s Tangier were all candidates for my mental take-home prize. What wins as an inspiration for narrative is the entire view of Tangier across water; I can imagine using it if I ever wanted to have a character approaching a city from the desert. Oddly enough, what made it really sing for me were the rocks in the lower right corner. Somehow their thing-ness and dashed liveliness capture the kind of zing we want to achieve in writing, too, with just the right descriptive details.

The Morgan website for the show has a selection of more images, any one of which might set off your imagination.
Be the first to comment