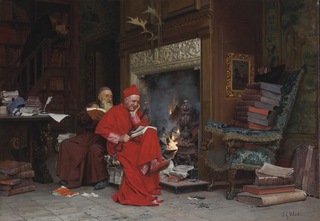 For those who think Norman Rockwell invented the naturalistic cartoon and for those who think hypocritical priests are a new phenomenon, voilà, one of Jehan Georges Vibert’s ecclesiastical comedies. I suppose as a writing exercise, one could devise a story about what’s going on in the picture, or about the psyche of a Vibert collector, or about what happens when a family sets out to sell a similar picture they find among a dead relative’s possessions. Not for me, but go for it if it tickles your fancy!