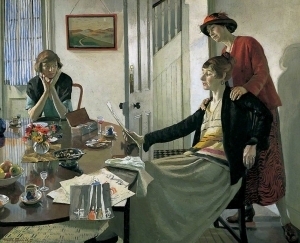 Harold Harvey, who studied at the Académie Julian, was a second-generation painter at England’s Newlyn art colony in Cornwall. Although this painting is from a later period than the heyday of the colony at Pont Aven, it reminds me of how my characters might critique each other’s work after a day painting.

At workshops, writers may also have to subject their work to immediate criticism; but in ordinary practice, you have to choose carefully when and with whom to share your unfinished work. One writer I know has a regular ongoing exchange with a close friend, another novelist. Having informal deadlines for chapters stimulates them, but they are careful to make only the most supportive suggestions and comments while a work is in progress. Not until it is complete do they say much or dig deep.

In an age given to sarcasm and, frankly, the need at times for searing analyses, there is another skill worth developing—the art if knowing how much to say and when in order to nourish the best.