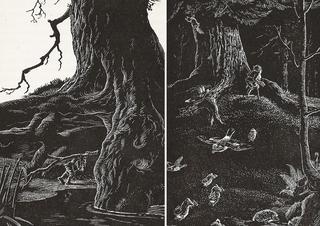 No, the Little Grey Men involved do not include Michael Bloomberg. They are gnomes invented in the 1940's by Denys Watkins-Pitchford, who wrote stories as B.B. and illustrated them under his own name. A post on Nature, gnomes, and the power of story at Terri Windling's blog, Myth and Moor, put me onto his novel for children, The Little Grey Men. Actually, I had already recently encountered the book in Philip Pullman's Daemon Voices, which handsomely reproduces one of the illustrations (p. 256).

Pullman says of "B.B.": "In some ways he was a limited writer, but the honesty and passion with which he talks about wild things and wild places suffuses his best passages with a love of landscape, and specifically the English landscape, that is irresistible." True!

Four things interest me specially. First, the gnomes' adventures really do move through an English landscape detailed with great natural realism—much more so than in, say The Wind in the Willows (a much greater novel), which it echoes from time to time. As an evocation of a corner of Warwickshire, it is mesmerizing.

Second, it is doubly elegaic. At the time of its publication, Great Britain was at war and all things English, including the very landscape, were threatened. Read now, it is a heart-tugging reminder of all that we are on the brink of losing irretrievably with climate change.

Third, in keeping with the book-and-illustration theme of this series of posts, let me say I've never seen the scratchboard technique used to illustrate a children's book. (Does anybody know of another artist who uses it for illustration?). Although I liked the example Pullman reproduces, I wasn't sure it would work for a whole book and forgot about it. Well, I can now say it does work!

Fourth, the experience of reading the novel was, for me, one of being won over. I borrowed a copy from the library and read it a chapter at a time at bedtime. At first, I found it a curiosity in literary history. It was soothing, but its limitations made me think I would simply return it and be glad to tuck it away as part of my interest in children's books and England on the home front during WWII. But the characters and the setting won me over. As it came to an end, I was sad to be finishing it and wanted to go on to the sequel, The Little Grey Men Go Down the Bright Stream.

Alas, our library system does not own a copy of Bright Stream, so readers, you guessed it: I have now ordered a copy from Better World Books and with it, of course, a copy of The Little Grey Men for my very own.

NB: We all need distraction and comfort as well as dedication in this frightening election year. Are there books that are helping you cope?

Hi Katherine, I love to dive into historical mystery (Deanna Raybourn's Veronica Speedwell and Lady Julia as well as Tasha Alexander's Lady Emily) and time slip novels (Julie McElwain's Kendra Donavon). A standalone I loved was "The Darkling Bride" by Laura Andersen. All these series and other single novels help to relax away from the fear mongering and hate groups' ignorance about the time we're living in.

Pat, thanks for the recommendations! I'm sure I'm not the only reader who will be glad to be introduced to these authors. The phrase "time slip" is perfect for both the genre and the idea of slipping away imaginatively into a different time.