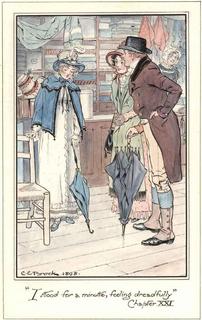 A semi-staged dramatization of Jane Austen's Emma is a Christmas bon-bon scheduled at Shakespeare & Co., in Lenox, Mass., and a group of us has already ordered tickets. Fingers crossed that the company can safely perform in December!

Ahead of the play, I read Emma recently and therefore smiled at this pretty, pretty, instantly recognizable depiction of Harriet Smith meeting Elizabeth Martin and her brother in Ford's linen drapery shop. It appears in the May 25th blog post by James Gurney, and it sent me searching further. I turned up an interesting web essay on Jane Austen's Emma at 200, including mention of Henry and Charles Brocks' illustrations for late-19thC "chocolate-box" editions of Austen's work. How these particular illustrations continue to influence readers' visualizations and moviemaker's visions of Austen might be a topic worth following up.

Meanwhile Gurney's point for artists has to do with where to place the heads of figures in relation to each other in a narrative picture. As it happens, I am working on a scene with four speakers—two major characters and two minor. An analogy to opera or stage plays is really stronger than to illustration, but imagining how an artist would handle a scene might be a good way to visualize a conversation. The task is to orchestrate its flow, aim spotlights, decide on highlights, edit for dramatic emphasis. Whatever works!