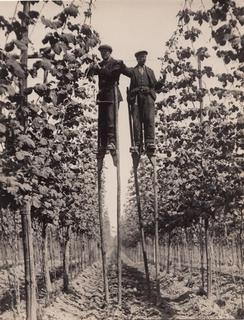 In tidying my computer desktop and folders, I ran across this image of farmworkers on stilts in Kent. I saved it from a Spitalfields Life post on the photographer William Whiffin (1878–1957). Most of Whiffin's work depicts London's East End and other locations (some of it very atmospheric), but it was the stilts that grabbed my fancy.

I once owned a pair. They were a part of my childhood, like bicycles and trampolines; and, of course, there were circus clowns on stilts. But only recently have I learned of their use in various pockets of traditional agriculture, notably working with the tall vines of hop plants, as here, and among shepherds in the Landes region of France. In fact, there's a whole history to be studied once you start looking. A place to start is Up in the Air, In the Margins, On Stilts. And even with the most casual research, surely there's a use for them in some story of childhood, the theater, or a strange corner of an imaginary world!