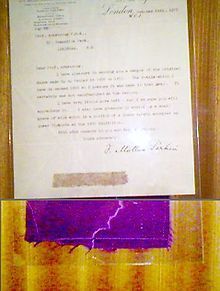 Letter from the inventor of mauveine dye with a sample of dyed silk (Creative Commons Attribution ShareAlike License v. 2.5.)
Who knew that a purple pigment led to the development of aspirin? Simon Garfield’s fascinating book, Mauve: How One Man Invented a Color That Changed the World, tells the story of William Henry Perkin’s discovery of the first synthetic carbon-based dye. The ability to mass produce paints, textile dyes, and drugs with stable chemical properties revolutionized industries, including fashion.

As I investigated the 1870s, I was struck again and again by how much in the modern world stems from the mid 19thC—artificial lighting, department stores, photography, railroads. And thematically, nothing could have suited my purposes better than the intersection of chemistry, color, and pharmaceuticals. Dyes and pharmaceuticals give Theodore an argument for persuading Edward to go to Europe; the chemistry involved quickens Edward's mind; and color gives him a connection to Jeanette's world. Read More
Be the first to comment 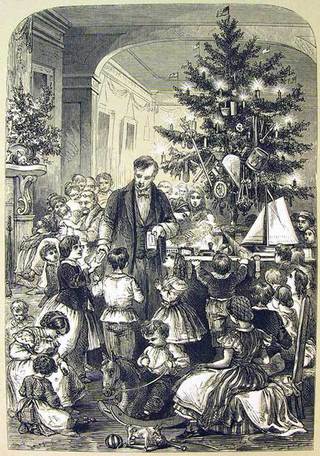 F.A. Chapman, The Christmas Tree
On Christmas Eve in Cincinnati, the German Murers would have decorated a table-top tree like the one in this illustration from an 1866 collection, Christmas Poems and Pictures. In 1866, the year after the American Civil War ended, Edward was in no shape to enjoy family festivities; but by the time he spends the holiday in Freiburg-im-Breisgau in the winter of 1878, his German cousins’ celebrations bring childhood memories back to life for him.

May your holidays be filled with joy, good books under the tree, and the makings of happy memories for years to come! Read More
Be the first to comment 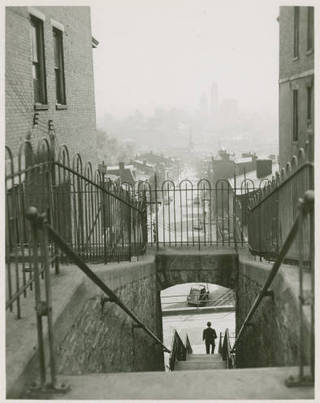 Sycamore Hill, Cincinnati, Ohio
I’ve been to Poughkeepsie, I’ve been to New York, I’ve been Paris—but never to Cincinnati. Old maps, photos, and drawings in 19th C guide books helped me visualize Edward’s city up to a point. What made me feel the place in my muscles were some drawings of hillsides and public stairs in a 1968 book called Cincinnati Scenes by Caroline Williams. This was crucial for imagining Edward’s climb to Theodore’s house on Mount Auburn after the mugger’s attack. A photograph of the steps from Dorchester Street to Sycamore Hill gives you an idea of how steep those hills really are. (And don't you love how the man at the bottom of the stairs echoes the man on the bridge on the cover?) Read More
Be the first to comment

Thomas Eakins, The Veteran
Can you imagine how astonishing it was to come across this profound, brooding portrait? Here was Edward! Other images told me a lot about what places looked like, how people comported themselves, what they wore. This one enabled me to probe deeper into how my own character felt—what he knew, what he regretted, what he found himself unable to resolve, understand, or forget.
In the latter part of the novel, Jeanette’s teacher, Carolus-Duran, remarks that Edward is a type that interests him. When I wrote that, I had in mind this painting by him, which some people believe to be a self-portrait. Read More
Be the first to comment

The Shrine of Shakespeare

Tags: painting in the novel, Vassar 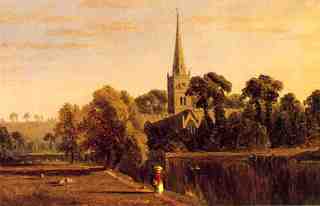 Sanford R. Gifford, The Shrine of Shakespeare (1859)
Jeanette carries her unfinished copy of Gifford’s Shrine of Shakespeare from Vassar to New York City. After she, her mother, and Cousin Effie visit the Tenth Street Studio Building, she brings it out to show the family—thereby provoking the quarrel that sends her to Paris. At Vassar’s Frances Lehmann Loeb Art Center, I was able to view works from the college’s earliest collection, the Magoon Collection. It helped me think my way into Jeanette’s situation to look at works she might actually see. The catalogue of an earlier Read More
Be the first to comment 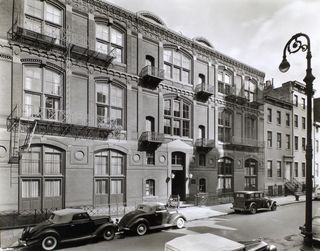 Berenice Abbot, Studios, 51 West Tenth Street, NYC
The cars tell you that this photograph of the Tenth Street Studio Building was taken in the 20th Century, but the picture gave me enough information to imagine the street as Jeanette, Effie, and Mrs. Palmer would have seen it. Notice how big the windows are compared to those in the building next door—an unmistakable sign of an art studio.
Artists with studios in the Tenth Street Building were nothing like the Romantic artist starving in his garret. These men wanted to entice and impress clients, to strut out as the accomplished professionals they were, as you can see here. For the sumptuousness of William Merritt Chase's studio, see this painting.  Read More
Post a comment 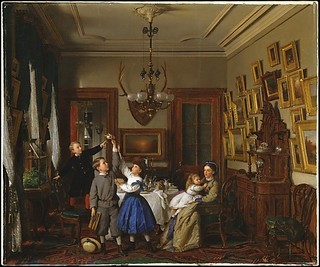 S. J. Guy, The Contest for the Bouquet: The Family of Robert Gordon in Their New York Dining-Room
To help me imagine scenes of Jeanette at her Aunt Maude’s house, this 1866 painting of a New York dining room supplied details of carpet, furnishings, crown moldings, door frames, etc. It also gave me a sense of how full Aunt Maude’s upstairs parlor should feel. Most surprising and cheering were all the small oil paintings on the walls. The Hendricks would not have owned so many, but Contest for the Bouquet shows that my young women artists were being realistic when they hoped to sell small-scale fine art to buyers for hanging at home.

By the way, this blog has turned up another coincidence: Do you see how the painting on the far wall echoes Moore's Morning over New York in the previous post? Does anything else in the painting specially strike you? Read More
2 Comments

I'm always curious about how an author sets a scene and researches an era. Thank you for sharing these pictures, and allowing your audience to imagine some of the visual inspirations for WTLF. Can't wait to read the book!

It's wonderful to get to read about and see visual evidence of the research that inspired your novel! I'm struck by the fact that this painting of the sunrise is in the center of the back wall (and the painting) by itself, whereas there are dozens of gilt-framed paintings on the adjoining wall.

Tags: painting in the novel, Vassar

Charles Herbert Moore, Morning over New York (1861)
This is a version of a painting at Vassar that Jeanette ruefully knows she may never see again when she runs upstairs to the art gallery after being expelled. I could feel her grief and her love of beauty as she gazed at it. But for me as the author, the painting also symbolized the bigger, more light-filled future that lay ahead for her across the bay. New York! Paris!  Read More
1 Comments

what a lovely painting! i can see that it would be inspiring!