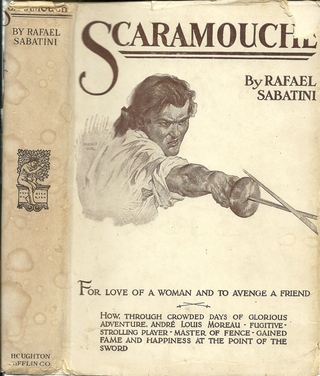 Wish I’d known! I loved Rafael Sabatini’s Scaramouche and The Sea Hawk when I was in high school. In checking out a reference to the Marquis de Carabas, I came across a post about Sabatini as a fencer. I would have gotten a kick out of it while I was writing about Edward’s fencing lessons and bout with Carolus-Duran! Oh, well, at least I’m reminded of Sabatini: He was born with a gift of laughter and a sense that the world was mad. Read More 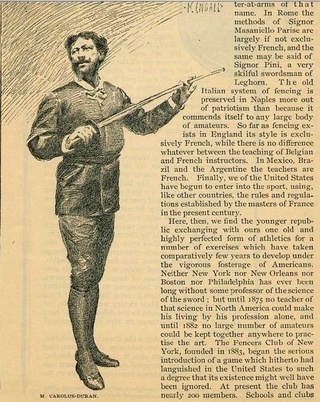 Kendall (?), M. Carolus-Duran (January, 1892)
A recent update from a correspondent who is doing research on Carolus-Duran led me to look over my collection of images by or about the artist. To my surprise, I saw that I have never posted this drawing of Carolus as a fencer. His swordsmanship made him dashing to his students—and to me! 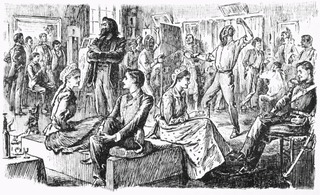 George du Maurier, “All As It Used To Be,” in Trilby (1894)
Trilby, a novel about art students in Paris by author and illustrator George du Maurier, was one of my richest sources for details and ambiance. This illustration contributed to  Read More
Be the first to comment

A First Lesson (1887)
After his walk in the Tuileries Garden, Edward takes his first lesson at Pierre Artaud’s fencing studio. Edward’s ambivalent taste for the sport gave me a way to dramatize his inner conflicts about chivalry and aggression. Fencing was an important sport throughout the 19th C in France and Germany, partly because real duels (though illegal) were still fought in both countries. Fencing manuals from the period and articles in popular periodicals about both the sport and duels gave me confidence in inventing M. Artaud’s establishment.