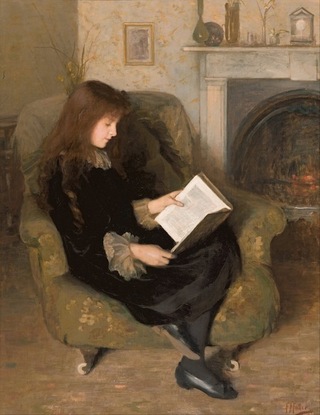 Florence Fuller, Inseperables (1900)
Terri Windling’s Myth & Moor is a great source of inspiration for writers, readers, and lovers of images related to the mythopoeia. Her August 26th post on Children, reading, and Tough Magic is trove of pictures of children reading and quotations on the value of fantasy stories. It also brought my attention another of Jeanette’s younger contemporaries who studied at the Académie Julian—Florence Fuller (1867–1946). Born in South Africa, Fuller is classed as an Australian artist; for although she studied in Paris and spent time in England and India, she grew up in Australia and her most productive years were spent there. Her work is collected primarily in Australian museums. In 1905, she became a Theosophist, a reminder to me that the occult was a part of the world around my heroines Jeanette and Mattie (though not, I think, of much interest to either of them). Read More
2 Comments 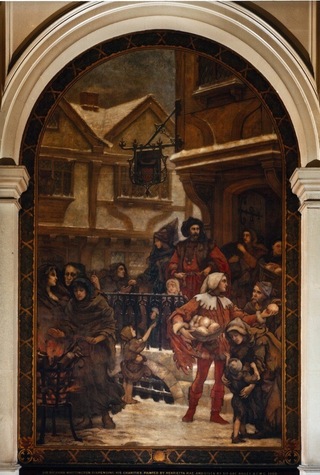 Henrietta Rae, Sir Richard Whittington Dispensing His Charities (1900)
Today’s image is from a distressing Spitalsfield Life post on plans to build a mezzanine in the ambulatory of London’s Royal Exchange. If built, the mezzanine will obstruct views of richly detailed turn-of-the-century murals of scenes from English history by several artists. I’m appalled by the proposed vandalism, but at least the post led me to Henrietta Rae. Rae was an almost exact contemporary of Jeanette, and her mural art is a reminder of the beautiful mural work done by female illustrators and fine artists of the period (the best known in America being the the Red Rose Girls). Read More
Be the first to comment

Gestural line in a magazine illustration 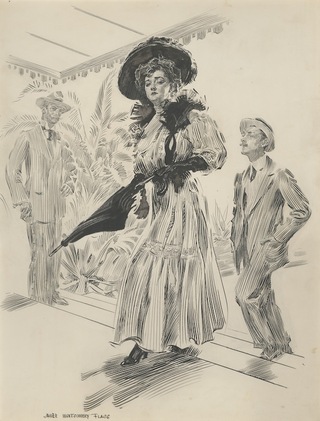 James Montgomery Flagg, illustration (1909)
Website tip: A post, Eye Candy for Today: James Montgomery Flagg ink illustration, is worth looking at for the picture and comments by artist and blogger Charley Parker. The period is right for my current heroine Mattie, and I’m sure Jeanette would agree with Parker’s comments on the effectiveness of Flagg’s gestural lines in the men’s faces. Read More
Be the first to comment 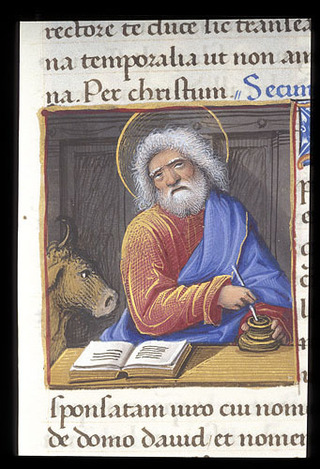 Jean Poyer, Luke (ca. 1500)
Another medieval image of an author at work. This one of the evangelist Luke gives me a giggle: he looks so much like any writer in a struggle to get down on paper what he wants to say! A bull, incidentally, is the medieval symbol for Saint Luke, but feel free to make up a story to explain what this one is thinking or has just said! 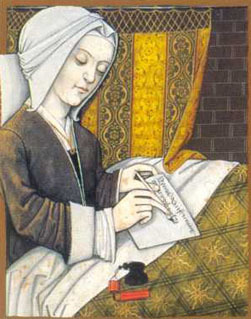 Christine de Pizan at work
I have recently run across this image of Christine de Pizan writing in bed at two or three websites, but never with any manuscript attribution. Doesn’t matter. What interests me most is its hint that one of the earliest professional women writers we know of may have written while still in bed. Edith Wharton did. Other women have. I did for a long time. One explanation is that  Read More
2 Comments

It's amazing she was able to be so accomplished in her era.

As a dancer I find I can practice, even in a smaller space than a dance studio. I practice in my studio apartment, which is 14' x 10' and has a longer hallway of 10' leading to the bathroom and kitchen.

If I'm in the dance studio, it's much more difficult in some ways because I have to contend with other individuals and couples, since I do competitive ballroom.

I like the quietness of my apartment facing the backyard. It helps me to focus. I have made breakthroughs in clarity of movement in this space.

I always find that astounding, but then, there's less pressure when I'm practicing alone than with a partner, but I still prefer to have my true dance partner show up and have the challenge of being true to my own work with him.

At least I would be able to build a career with him instead of always paying an instructor for information and practice.

Pat,
I love the idea of your making "breakthroughs in clarity of movement." It reminds me of Martha Graham's words for a young dancer: "There is a vitality, a life force, an energy, a quickening that is translated through you into action … It your business to keep it yours, clearly and directly, to keep the channel open." 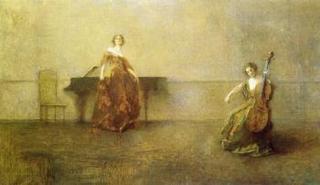 Thomas Wilmer Dewing, The Song and the Cello (ca. 1910)
As readers of this blog know, I find the cross-pollination of the visual and narrative arts fruitful. Thomas Dewing’s painting of a singer and cellist seems to me a striking visual metaphor of an important literary principle: In the most potent writing, something happens between the lines.

Here, the visual space between the  Read More
2 Comments

I went to the site that talks about tonalism. It fuzzy like impressionist paintings, but more outlined. I like both styles.

The Dewing painting of the singer and cellist reminds me of couples in ballroom who are not happy with the way the dancing is going, and when they stand in front of each other, before they take dance position, the space between them is wider than other couples whose careers are either more successful or they just go with the flow of career ups and downs better than others.

Very interesting that you pick up the psychological distance between the two figures in the painting! Thanks for pointing that out. 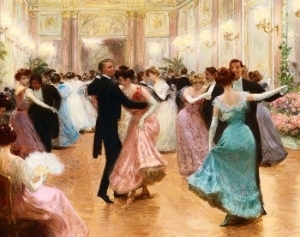 Jean-Georges Béraud, Elegant Soirée (n.d.)
This one is for Pat, who commented on the last post. Ballroom dancers!

“Anonymity,” my work-in-progress is about Jeanette Palmer’s younger sister, Mattie, who works in publishing in New York City in 1908. Works by Béraud helped me visualize Jeanette's Paris for Where the Light Falls. This one looks to me like a pastel from around 1900 (look at those Gibson  Read More
2 Comments

Thanks so much, Katherine, for mentioning me. I have a color printer, so I was able to print out this beautiful painting. I have it in front of my cordless phone next to my computer, so I can enjoy it.

I think Jeanette would have liked the challenge of painting movement to capture the spontaneous expressions of the dancers. If she were still living in the early 20th-century, perhaps she would have tried to paint the modern dance pioneers like Isadora Duncan as well as social dancers depicted here in this painting.

Yes! Movement would be a challenge after still lifes, portraits, and landscapes; and, of course, facial expressions would carry over from portraiture and matter very much. But I hadn't thought at all about how modern dance might influence a graphic artist's thinking. That's a wonderful new area for me to mull over. Thanks so much!