Out a train window 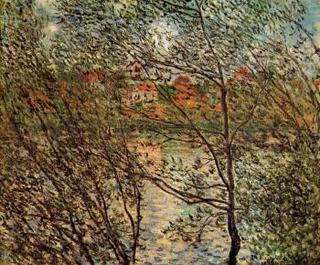 Claude Monet, Springtime through the Branches (1878)
I came across Springtime while tracing the route between Dieppe and Paris. It showed me what Jeanette might see from her train window. The speed of train travel made the countryside seem to unroll continuously outside the frame of a window. Moreover, railway beds serve only to carry trains, and scrub brush along their banks can screen the view for miles. Monet’s sketchy, broken brush strokes allowed me to catch a glimpse of a half-seen house with an orange roof and imagine Jeanette’s seeing it for an instant. In words, all that remains of that moment is the phrase “red-twigged coppices on riverbanks” on p. 66, but, believe me, she saw the house! Read More
2 Comments

I did not know this painting, which is a perfect illustration for that section of your book!

I love the way the branches seem to curve slightly to the left, as if stirred by a gust of wind from the passing train. Surely the train is chugging from left to right, don't you think? Seeing this painting as a scene glimpsed from a railway carriage is a brilliant idea, and I'm so glad that you point to the few words in the novel that conjure it up.