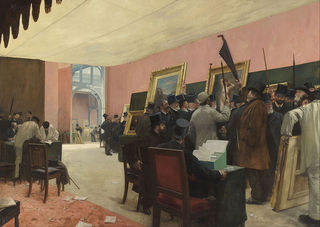 Henri Gervex, A Session of the Painting Jury (1885)
In 1878–1880, the period of Where the Light Falls, submissions to the annual Salon were judged by an elected jury of artists. Anyone whose work had been accepted for previous Salons could vote, and the jurors were generally the most distinguished (and most conservative) artists of their day. Serving was an honor, but also a monumental task to be accomplished in only a few weeks. Thousands of submissions had to be reviewed in batches. Jurors raised an umbrella or cane for a “yes” vote, as Gervex shows some of them doing. Then, after a first big winnowing, it all had to be done again for final selections.

The jurors depicted in Gervex’s painting are listed alphabetically at the Musée d’Orsay website. Carolus-Duran is very recognizable as the hatless man almost dead center in the painting. Jeanette’s other main teacher, William-Auguste Bougureau, is also depicted, but I can’t pick him out. If anybody knows where to find a diagram keyed to Gervex’s painting, please give the reference in a comment!

Because the exhibition was sponsored by the French government beginning in 1667 and held regularly from 1737 on, its history is complicated. During the 19th C, the rules about who could submit, who could vote, and who could serve on the jury changed more than once. In The Judgment of Paris: The Revolutionary Decade That Gave the World Impressionism, Ross King gives a very readable account of what happened to establish the system in place when Jeanette and her friends were in Paris. For a review of his book, click here.

For an article on the Salon system, click here.