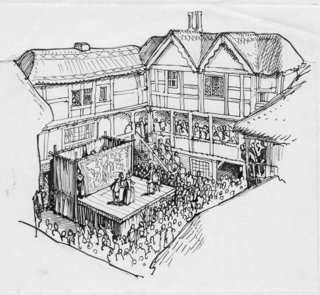 C. Walter Hodges, Inn Yard Stage
When I read Philip Pullman’s new novel, La Belle Sauvage last fall, I noted with a little puzzlement that he has the hero, Malcolm, explain the name of his canoe by saying that an uncle owns a pub called La Belle Sauvage downriver. Imagine the fun of running across the explanation: “The first inn to become also a playhouse was the Bel Savage, which was on the north side of Ludgate Hill, about a 100 yards west of Ludgate. It was in business as a public playhouse in 1575.” Herbert Berry, “Playhouses,” in A Companion to Renaissance Drama, ed. Arthur F. Kenney (Oxford: Blackwell, 2002), p. 149.

Naturally, I Googled and lucked into this drawing by C. Walter Hodges, all of whose artwork connected with the Elizabethan theater is now available at the Folger Shakespeare Library

A nerdy footnote and source of future information and inspiration. What more could an historical fiction/fantasy writer want?

I read Pullman's "Book of Dust", too, and it's a great story to see the early life of Lyra.

The drawing is so precisely what I always envision when I think of Shakespeare's Globe Theatre.