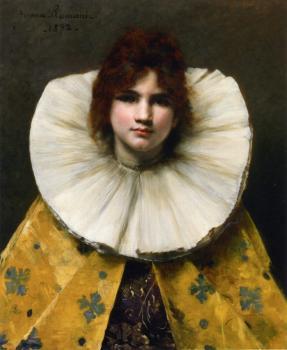 Juana Romani, Young Girl with a Ruffled Collar (1892)
I wish I had known about the artist’s model and painter, Juana Romani when I was writing Where the Light Falls. She actually posed for Carolus-Duran and studied with his associate, Jacques Henner—although, maybe it’s just as well I didn’t know! It would have been tempting to include a character based on her, and the last thing the book needed was another character. Still, I’m glad to add her to the novel’s imaginative afterlife. And a fictional biography of her exists in French, Juana Romani: la muse oubliée by Diane Elisabeth Poirier.

I spotted her among a raft of photographs of French academic painters of the period and was surprised: here was a woman painter who appeared in none of the sources I had consulted in my research. Yet I now find that she was well known in her day. In a letter of July 1903, Henri Matisse lumped her in with other artists, including Carolus-Duran, whose works were selling well (see Hilary Spurling, The Unknown Matisee, [Univ. of Calif. Press, 2001], p. 241 and p. 451n23]. And she made so much money in her day that she founded and a school of art and endowed an annual prize in her birth city of Villetri in Italy.

For a site with photographs of the artist and examples of her work as a model for Henner and Falguiere, click here. The text is in Italian.

For an article in French (with an English abstract) about her career, click here

Romani's painting of Judith is absolutely astounding. It comes out of such darkness very similar to Rembrandt.

I was glad to read she received the respect of fellow artists, even though she was female. Her extraordinary talent surely make it happen. The men couldn't help themselves and had to admire her work no matter how they may have felt about women in general.