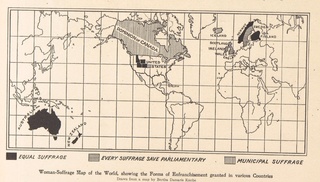 Bertha Demaris Knobe, "Votes for Women: An Object Lesson," Harper's Weekly, April 25, 1908, via Cornell University – PJ Mode Collection of Persuasive Cartography.
Since 1908 is my magic year for ANONYMITY, imagine my pleasure in finding this Woman-Suffrage Map while exploring Cornell’s Mode Collection of Persuasive Cartography. The map appears in an article in Harper’s Weekly which reports on the status of the international woman’s suffragist movement with none of the hostility or arch humor that mar too much male journalism of the period. I’m in luck with this item of the Mode collection, moreover, because it reproduces the entire article whereas The Online Books page for the magazine has no issues from 1908. The article is a good reminder that women who looked abroad had reason to be optimistic that women would one day secure the vote. It concludes:

[I]n this official making of the woman’s suffrage map of the world, encouragement comes from every masculine Parliament on earth. as ex-Minister Luzzati said recently before the Chamber of Deputies at Rome, “The whole civilized world is now agitating the question, which must be settled in favor of the women sooner or later.”

Maybe I should let my characters read the article!
Be the first to comment