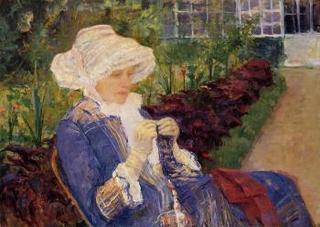 Mary Cassatt, The Garden (1880)
Soon after the dinner party, Cornelia Renick is clever enough to put Effie at her ease by casually revealing a problem she is having with a piece of embroidery. Needlework is a minor motif in the novel because it played a part in many women's lives in the 19th C. (A novelist needs to think about the nitty-gritty and not just the big patterns of history.)

Mary Cassatt's painting of her sister Lydia, knitting in the garden, gives me the opportunity to acknowledge four debts. First to Cassatt for her paintings.

Second to Cassatt scholars for much background information about American women artists in Paris.

Third to Harriet Chessman, whose jewel-like novel Lydia Cassatt Reading the Morning Paper enthralled me before I even thought of writing my own.

And fourth to my sister, Janet Smith (one in a long line of Jane/Janet/Jeanettes), who helped me on a key point. Janet is active in the Embroiderers Guild; and when I asked her what sort of needlework problem Cornelia might have in this scene, she immediately supplied the dropped stitch and the rabbit. Thank you, Janet, for your expertise and your unfailing support since the novel has been out!

There are many other paintings of women engaged in needlework. If anyone can supply a link to a favorite, I'll be happy to post it in the comments.
Be the first to comment