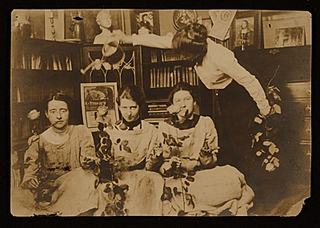 Elizabeth Shippen Green, Violet Oakley, Jessie Willcox Smith and Henrietta Cozens in their Chestnut Street studio (ca. 1901)
After Saturday's blog alert on moving pictures, here's a still that tickled me while I was writing Where the Light Falls. Although I wanted events in my novel to be accurate to 1878–1880, not everything that inspired me came from that period. The camaraderie, humor, and tensions of a shared studio as well as the fruitfulness of women’s friendship were exemplified by the three women artists shown in this photograph. Jeanette's somewhat younger contemporaries, they began living together in 1899 and called themselves the Red Rose Girls. They are the subject of a fascinating book by Alice A. Carter, The Red Rose Girls: An Uncommon Story of Art and Love (2000).

Oakley was a muralist while Shippen and Smith were book and magazine illustrators—the eventual career I foresee for Jeanette after her return to America. Cozens kept house for the other three, just as Cousin Effie does for Jeanette, Amy, and Emily at Pont Aven.
Be the first to comment