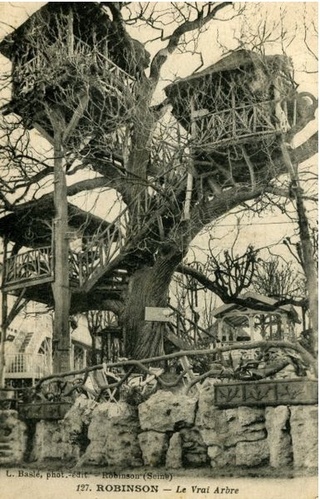 Postcard, Robinson—Le Vrai Arbre (n.d.)
The village of Plessis just outside Paris was the site of a restaurant built in 1848 as a tree house in honor of Swiss Family Robinson. Its popularity led to the town’s adopting the name Plessis-Robinson Meals in baskets—typically roast chicken, bread, and wine—were pulled up on ropes to customers.

In a passage that was dropped, Jeanette, Effie (a great fan of Swiss Family Robinson,) and Edward visit it after the Vanns have left. I admit I sent them there more because I was enchanted by the idea of the restaurant than for the plot—though the walk back to the Plessis-Robinson train station did prove the occasion for Jeanette and Edward to first hold hands in the dark. Oh, well, a baseball game among the American art students in the Bois de Boulogne had to be dropped, too (and American art students really did play baseball in France).

For more photographs of the Vrai Arbre Robinson, click here.

What fun! I hope you're saving all the edited-out bits and will re-work them for future books.