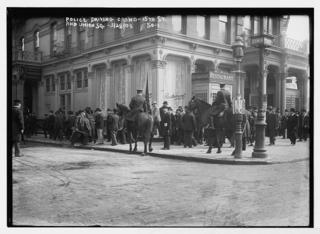 Mounted and foot police drive crowd from Union Sq., in front of Hungarian Restaurant, 15th St. & Union Square, New York
Having read that Hungarian restaurants were among the first ethnic restaurants in New York to attract customers outside their own community, I’ve sent Mattie and her lover to one early in ANONYMITY. For the fun of it, I tried to find images of one in 1908. Lo and behold, this photograph! It shows a nicer place than the one I’m sending my illicit couple to, but still reassuring confirmation that a Hungarian restaurant was plausible.

Hungarian cuisine is mentioned in one of my sources for food in New York City, Appetite City: A Culinary History of New York by William Grimes. For a review, click here.

On a different note, I haven't tried to include mounted police or demonstrators in my scene, but maybe I should! Mattie's boss, the potboiler king, surely would. For Mattie the suffragist, however, it's worth noting that the crowd in the photograph is all male.