On horseback, in pants 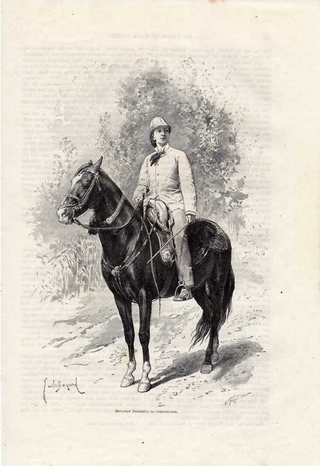 Émile-Antoine Bayard, Madame Dieulafoy (1885)
For my work-in-progress, I’ve been reading the autobiography of journalist Ida M. Tarbell, All in the Day’s Work. In 1892 for a McClure’s Magazine article, Tarbell interviewed the French archeologist and writer Jane Henriette Magre Dieulafoy, who with her husband Marcel worked on excavations in Persia. Tarbell reported that fieldwork made it necessary for Mme. Dieulafoy to wear trousers, but it appears that she adopted them as early as the Franco-Prussian War, while Marcel was in the army. Since both of the couple liked her in short hair and men’s clothes (she went to a good tailor), they applied to the Paris police and won permission for her to wear them in public when they were at home.

Besides the gender-bending brio of it all, what struck me was the parallel to Elizabeth Jane Gardner, who eventually married William-Adolphe Bouguereau. She does not appear as a character in the narration of Where the Light Falls, but Amy Richardson tells Jeanette how Miss Gardner won police approval to wear men’s clothes so that she could crash the life class at the Gobelin tapestry factory in the days before the Académie offered one to women. From a very informative blog post on Gardner at the blog, my daily art display, I have finally found an account of the city ordinance that prohibited women from wearing trousers in public in Paris—and guess what? It was not repealed until January 2013!

For the Wikipedia article on Jane Diulafoy with images of her and Marcel, click here.