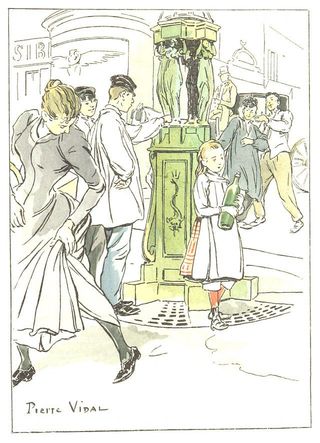 Pierre Vidal, Wallace Water Fountain (1893)
Writers of historical fiction are susceptible to what someone called “research rapture,” elation over trivia. It may be just as well that I did not know about Wallace water fountains when I wrote Where the Light Falls or I might have gleefully included one whether it was needed or not.

A recent BBC piece on impoverished Britons in France alerted me to the existence of these public drinking fountains. They were financed by Englishman Richard Wallace to provide safe drinking water for the poor in Paris after aqueducts were destroyed during the Franco-Prussian War. (Okay, maybe there was one near Cousin Effie's McCall Mission!)

For all the illustrations by Vidal in Émile Goudeau’s Tableaux de Paris ... Paris qui consomme, click here.
Be the first to comment