Marie Bracquemond at her easel 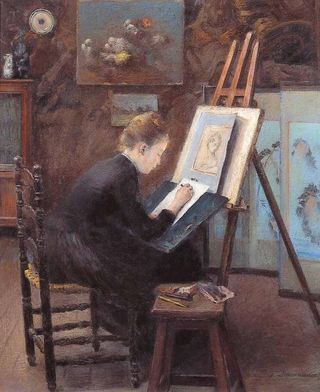 Edouard Dammouse, Marie Braquemond au chevalet (1890)
I only recently found Dammouse’s pastel of Marie Braqemond at the Galerie Ary Jan in Paris (where it sold). The picture feels like reentering Jeanette’s world, and so it’s a good place to begin running through Where the Light Falls again, more or less chronologically.

My first ever post showed three women artists in a studio. Because I love novels in which I share friendships vicariously, Jeanette’s time with Amy, Emily, and Sonja was always a major theme for me. Another was the seriousness with which women artists worked in the 19th C—a dedication that seems evident in this image. It looks to me as though Mme. Bracquemond is copying a drawing propped up against a canvas on her easel. Does anyone read the picture differently?

For period atmosphere, note the Asian screens in the background to the right and the blue-and-white ceramics in the upper left.

Not only is this image new to me, but so is Edouard Dammouse. I’ll be writing a post on him later when we get to the porcelain manufacturer from Limoges who attends Mrs. Renick’s garden party. It’s enough to say here that Dammouse was a primarily a ceramics artist who worked for Marie’s husband, Felix Bracquemond.
4 Comments

I don't think this artist is Marie Bracquemond! In 1890 she was 50 years old. She had black hair when she was young....
It's a "fake information"

Thank you! I have just found your earlier comment. A misidentification perhaps, but please not so harsh as "fake information"! Do you have an hypothesis about who the model might be? Do you think the artist is someone besides Dammouse? I have now checked on-line and found the same image identified as Marie Bracquemond by Eduouard Dammouse at several websites. The error my have a common origin, but we are all posting honestly.

Bonjour,
I find only this day 21/04//2019 your answer. I'm looking to many pictures and photographies to try to find who is the young woman but it's difficult. There are no many informations about the families of the 2 brothers Dammouse. Albert has a girl born in 1880. Perhaps it'could be her portrait? Nothing about Edouard and his family.
It's true it's very difficult on internet to change "fake news" and give the right information.
Cordialement,
MF Bastit