Wish I'd seen Bauck in time 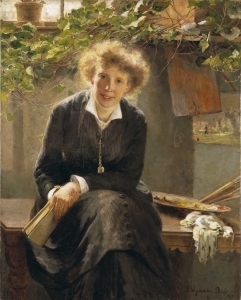 Bertha Wegmann, Portrait of Jeanna Bauck (1881)
It is gratifying to run across paintings (like Vollon’s Mound of Butter) that seem to jump right out of the world of my novel, but here’s one I wish I had seen while I was writing. What an engaging gaze!

The subject of Danish artist Bertha Wegmann’s portrait’—the Swedish-born Jeanna Bauck (1840–1926)—would have been Edward's contemporary rather than Jeanette’s, but fiction is fiction and inspiration is inspiration. She's not pretty but I can't take my eyes off her. I see good-humored mischief in her face and a downrightness that is very appealing. Whether she would have influenced how I characterized Jeanette or Amy, I don't know. Maybe she would have demanded a place of her own in the story.