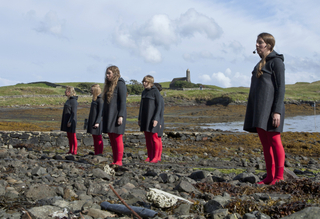 Performance, Away with the Birds (2015)
I try to keep these posts short and connect you to something you might use. This one is longer because, on this anniversary of the Trump inauguration, I’m pulling together several things to help myself move through and beyond the grimy, depressing aspects of the present day to something life-enhancing. I hope it helps you, too.

First, sisterhood: Reports on the Women’s March redux is enheartening. In the era of #MeToo, it’s good to focus on women’s worth—enlightened male companions welcome. We must also remember that it’s not just sexual predation that is an issue. I was interested to read in the January 12, 2018, Guardian, that “[a]fter 2017’s Cambridge Companion to Irish Poets included only four women, 250 writers have agreed to boycott anthologies, conferences and festivals where women are not fairly represented.”

Second, Ali Smith’s novel Autumn—a short, astonishing read. It catches a lot about what’s wrong with the world after Brexit and Trump. When the main character, Elisabeth Demand, is reading up on a political scandal from the 1960’s, Smith writes, “She hadn’t known that proximity to lies, even just reading about them, could make you feel so ill” (p. 225). But it also embodies the joy and energy of art, including its use of the largely forgotten Pop artist, Pauline Boty, and the exuberance of women cutting loose to do what they really want even while men set up security chain-link fences.

Third, via a post by Terri Windling, Away with the Birds, I learned about the multimedia artist, Hanna Tuulikki and have begun exploring her website, Away with the Birds/Air falbh leis na h-eòin. Tuulikki has taken Gaelic songs that incorporate imitations of birdsong, mostly shore birds, as the basis for extraordinary music of her own, including the performance piece for women’s voices that is the focus Away with the Birds.

One segment is based on a keening song that was sung by professional female mourners at a death; that caoin was itself based on the cry of the common redshank, “Gradually,” writes Tuulikki, in commentary on her piece, “… the custom of keening at funerals died away, or, to be more accurate, it was submerged, for it can still be heard, for instance, in laments played on bagpipes. There is a discernable shift, from the keen, traditional domain of women, to the lament, in the stewardship of men. When the singer and piper, Calum Johnston, recorded the Pil-il-iu song …, he said that his singing was in imitation of bagpipes.” In other words, women imitated the birds. Bagpipers imitated the women. Male singers imitated the bagpipes. And now Tuulikki takes us full circle back by reclaiming women’s imitation of birds and the birds themselves.

I had to interrupt writing this post to attend a public forum on short-term rentals, an issue in the small town where I live, because, yes, we need to participate in local politics. But, what I find so exciting in all the creativity I’m looking at today is what comes when we engage in what we really care about. We see the world anew, we explore, and we make it safe for each other to expand and grow

Artists and sisters of all stripes, take heart! It matters what we do no matter how large or small our audience. Write poetry, choreograph an unexpected dance, paint pictures that burst with life, weave, knit, run for public office, and, above all, tell your stories. It keeps the honest heart free.
2 Comments

The only hopeful movement that is a result of the Trump administration is the power of positive, loving people to cleanse this country of inequality and injustice. More women are running for office. The party is over for men who take advantage of women in factories, offices and entertainment.

When I saw on election night that Trump won, the first thing that came into my mind was, this is cleansing time. He will bring out the worst people to be seen and heard and ultimately lose all their power as people finally come to realize the mistake they made.

The weak and insecure put him in office thinking he is some kind of savior. Trump says he's a fifties guy. He talks about jobs that are becoming obsolete. One coal mining company actually went to alternate energy and closed the mine. The people who voted for him are living in the past like Trump and are too afraid to see what the new training is all about as innovation continues.

I watched a panel of people talking about Trump after one year in office. They are die-hard Trump supporters and think he is doing even better than they expected. They don't see the reality of Trump or anything he's doing.

Pat, I agree with much of what you say, but I also believe that anger is good only as a first response. It must lead to something healthier or else it becomes destructive to both the individual and society. We cannot be free or joyous when we let the object of our horror dominate our thoughts. That's why I urge all my readers to turn their attention to whatever is most creative in their lives. Thanks for sharing your passion. May it lead you to find new ways of enhancing your life with people who share your vision for a better world