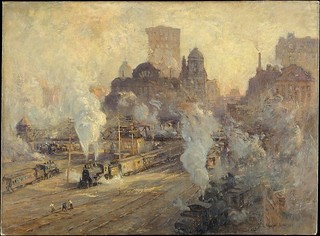 Colin Campbell Cooper, Grand Central Station (1909)
When I saw this image of Colin Campbell Cooper’s Grand Central Station, my first thought was not that it might be helpful for ANONMITY, despite the 1909 date. Instead, the picture instantly recalled Claude Monet’s paintings of the Gare Saint-Lazare, which did inform Where the Light Falls. (For Peter Olsen's montage of Monet’s twelve paintings of the station, click here.) To have Mattie see Grand Central in the same terms that Jeanette saw the Gare Saint-Lazare just wouldn’t feel true. Moreover, while this high vantage point might be possible for an omniscient narrator (which technically I have used in both novels), it would have to be accounted for in the kind of fiction that closely follows the point of view of its central character (which mine does).

Nevertheless, it's fun to see connections. Colin Campbell Cooper was an almost exact contemporary of the real Jeanette—and, like my fictional Jeanette, he studied at the Acadèmie Julian, where one of his teachers was William-Adolphe Bouguereau. Since Cooper's New York phase coincides with Mattie’s, I hope to find inspiration in some of his other works. For more of them, click here. For the Wikipedia article on him, click here.

Thanks once again to a post at Lines and Colors for introducing me to an artist.
Be the first to comment