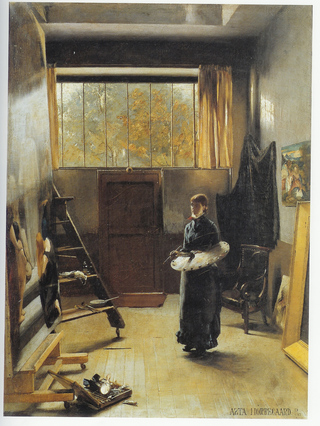 I saw this painting by the Norwegian painter Asta Nørregaard at an exhibition while I was researching Where the Light Falls. At the time, I was unable to find an image on line, but memory of it influenced how I imagined Jeanette’s first studio of her own. Its spareness and gray walls, in contrast to the lusher studios so often depicted during this period, seemed specially appropriate to Jeanette’s pocketbook and her mood at that point in the novel. At the time I was writing, I thought that it was Cousin Effie’s love of Whistler’s decorative schemes at the Paris Exposition Universelle of 1878 that made her to want to paint the walls yellow; I suspect now that the colors in this painting also subtly influenced my imagination of how the two characters would react to a studio space.

Nørregard painted this self-portrait during her time in Paris (1879–1885) after she completed a commissioned altarpiece for the church in Gjøvik in Eastern Norway.

This is a gorgeous picture. The reflection of the light across the picture within the picture is glorious in the amazing talent it takes to produce something like this.

I like pictures I can walk into and feel a part of it all.

Yes, I loved it because it was a very particular space that I felt I could walk into—and then invent a similar space with differences.