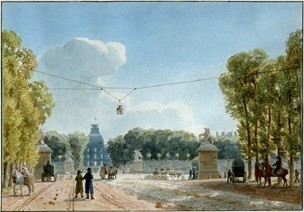 Jean Lubin Vauzelle, Tuileries from the Champs-Elysées (before 1836)
The absence of the Luxor obelisk, which was erected at the Place de la Concorde and opened to the public in 1836, and the long coats and top hats of the men suggest that Vauzelle painted this picture, when? ca. 1830? Anyway, what really interests me is that lantern strung over the road, presumably an oil lamp. Paris, the City of Light, must have had a remarkable crew of lamplighters if they kept that one lit. In the history of art, Vauzelle does not figure large (although he did win a gold medal at the Salon of 1810); but clearly he was a good draughtsman.

Pictures by minor artists that were meant simply to record what things looked like are a great help in picturing worlds. Something like a lantern hung over a major intersection can either add a touch of verisimilitude to narrative background or figure in some significant way in a story’s plot. I’m going to squirrel this one away for future investigation. And shouldn’t we all be keeping an eye out for the offbeat details that characterize our own world?
Be the first to comment